You are successfully unsubscribed.

There are two different distinguished technologies in solar energy. Solar collectors are used to generate thermal energy and solar cells (photovoltaic modules) are used to generate electricity. Thermal energy generated by solar collectors can be used for heating, hot water preparation, pool heating, technological processes or other needs. Solar photovoltaic modules generate electricity. A photovoltaic solar module generates 12-38V DC, which is not used everywhere for domestic purposes, so an inverter or converter is needed to convert the DC to 220-230V AC for domestic use.
The past few years have been important for solar photovoltaic power generation - more power in the world is generated from solar modules than any other type of newly installed power generation technology. In 2017, solar power was one of the major new sources of energy in China, India, Japan and the US. About 500 GW of solar power is produced worldwide, of which about 200 GW in China alone. The private sector produced an additional 50 GW in 2017 alone in this country, while the US produces about 60 GW in total.
According to a report from the Global Renewable Energy Agency, around 40,000 solar panels are installed worldwide per hour, which are located in over 30 countries with installed capacity exceeding 1GW and above. The leaders in terms of installed power capacity per capita are European countries - Germany, Belgium, and Italy.  At present, Germany is the largest producer of solar energy in Europe generating over 50 GW. 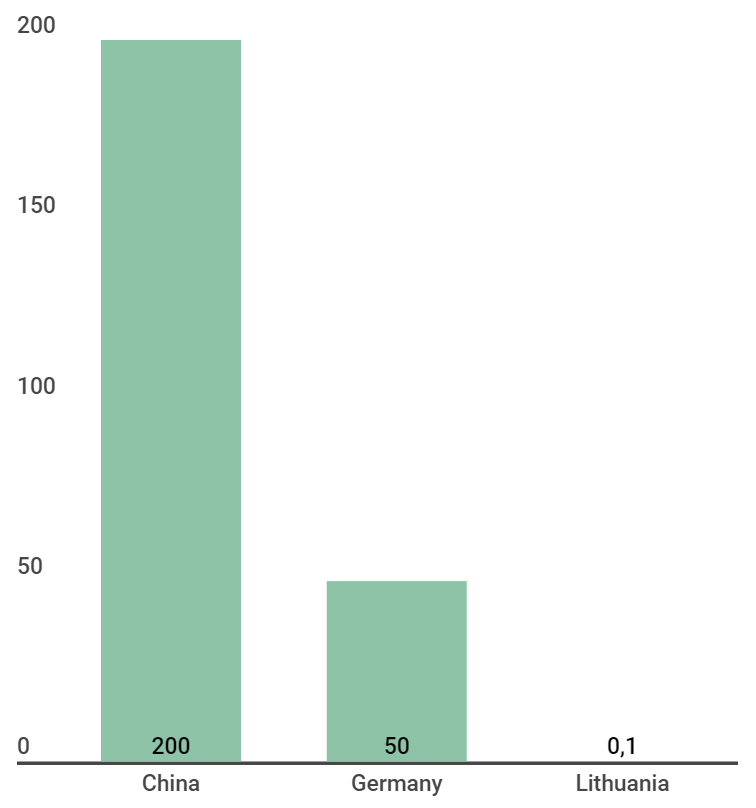 Today, Lithuania generates about 100 MW - a very small amount compared to other countries, but future plans are quite ambitious - by 2030, energy from renewable sources in the heating sector should account for 90% of total energy consumption (while the target for other European countries is 50%). By 2050, Lithuania is committed to meet 100% of its electricity needs using power from renewable energy sources (about 18 TWh) and to export part of the generated electricity - the total capacity of the power plants should increase to 2-2.5 TW.  In this context, solar energy is becoming a priority area with solar energy estimated to account for about 20 percent of the total electricity production (solar power will increase to almost 45 GW).

Indicators planned to be achieved in Lithuania in 2050
In order to achieve these ambitious goals, it is not only necessary to promote the use of solar energy among the population and the business sector, but also encourage research and development. According to best global practice, solar energy production costs have decreased by 50% in the last decade alone.
Lithuanian Business Support Agency encourages business and science representatives to implement scientific innovations that would reduce not only production costs but also environmental pollution. Business and science are therefore invited to take an interest in EU solar energy investment instruments. Business representatives are currently invited to apply under the EU investment measure ‘Experiment’ for Research, Development and Innovation and the measure ‘Renewable Energy Sources for Industry LT+’ aiming to invest in renewable energy equipment.

In order to provide you with the best possible browsing experience we uses cookies. To accept our cookie policy please click „Accept“ button or continue to the site. Leaving the site will be interpreted as not accepting the policy. You can always revoke this authorization by changing setting in your browser and deleting the cookies.